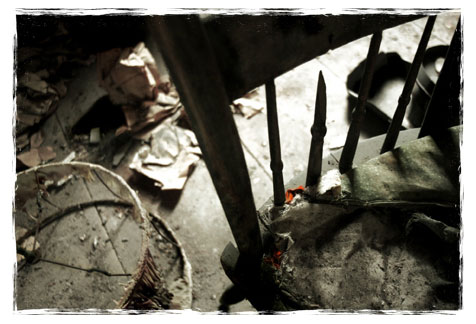 The Voice 1156 Gallery is honored to present "Caps and Straps," a group show featuring work from eight photographers. Subjects include estrangement in a foreign land, travelling in Central America, the investigation of an American icon, daily routine in San Francisco, female character in American society, and figurative studies as psychological projections.

For the last three years, Seth has been intermittently working as a freelancer and traveling America in an old used car to continue photographing for the project Tattered. His most comprehensive photo essay to date, Tattered investigates the desecration and misuse of the American flag in the context of the U.S. Flag Code.

Most recently, Seth found work in Manhattan as the Imaging Studio Manager for world- renowned photographer Steve McCurry. Late in 1999, Seth co-founded and continues to publish the small-format magazine the journal a publication focusing on contemporary youth culture. He also spent a recent stint as Photo Editor for the regionally notorious Eastern Edge snowboard magazine. His photography is collected privately throughout the United States, has solicited praise in national photo competitions and has recently been published in several major periodicals.

Currently, Seth resides in Vermont, working as a freelance photographer and designer.

Brett Critchlow was born and raised in Pittsburgh, Pennsylvania, studied graphic design at Penn State University, and then moved to San Francisco in 1995. In 1996, Brett founded Juice Design, a multi-disciplinary design studio where he has created images for clients such as Yerba Buena Center for the Arts, The San Francisco Art Commission, Levi's, Students for a Free Tibet and Death Cab for Cutie. Brett's work has been featured in a number of galleries, publications and TV shows including Juxtapoz, Blue Torch T.V., Zoller Gallery, Hot and Cold, AIGA Poster Show, Penn State Design Alumni Show, Print Design Annual, How Design Annual and numerous books on art and design.

Brett is also committed to contributing to the artistic community in San Francisco and host's art shows throughout the year at the Juice Design studio. Brett lives at Ocean Beach in San Francisco, surfing and traveling as much as possible.

Born in the California sun, tempered and forged by the cold winters of Boston, Mr. McKay-Randozzi's style shares bits of qualities from both locations. The beauty of the world dulled by the harshness of reality. His first camera was a Polaroid Land Camera that he purchased due to an inspirational friend in 2001. In the years since then his photographs and writings have been featured in art shows, various publications and art web sites.

He has become a recluse in the past months. Only leaving home to work, skate, hangout with his girlfriend, shoot photos and go down to the corner store for Cherry Coke and chitchat. Up until recently he was devoted to the Land Camera format, but in the past year he has been using the Olympus PEN half-frame cameras and a Pentax K1000. His dynamic and fluid style captures all aspects of his surroundings. From bus life to the bar, office parties and downtown skylines he shows the viewer a new perspective of the ordinary points along the path that we all cross in daily life.

He has been a contributor to Fecal Face Dot Com for the past 4 and a half years, contributing articles, interviews, documenting art shows, assisting in production of art shows and various other related tasks.

Born in Seoul, Korea in 1980, Ye Rin moved to Los Angeles, CA in 1992, where she currently resides. She graduated from University of California, Irvine in 2003 with a BA in Studio Art. Her photos have appeared on Anthem, Mass Appeal, MetroPop, Theme and Tokion.

Additionally, her work was on the cover as well as featured in the "Underexposed" section of the July 2003 issue of Pictured, a photography magazine based out of London. In May of 2004, she had her first solo exhibition at GR2 gallery in Los Angeles.

Bob Lajes was born in 1977. He grew up an only child in a middle class family in San Diego. He knew as a young boy that he was an artist. In grade school he spent his time drawing, learning about the masters, and mouthing off to his teachers. When Bob discovered photography in 1996, he found the perfect symbiosis of art and practicality. Bob received his bachelor's degree in Fine Art from UCSD in 2005. Although his true love is photography, he delves into several mediums such as graphic design, sound and video, small installation, and silkscreen.

Artist Statement: It is never night. It is never day. Nor is it the oppositions pitted against each other. It is the gray area where the transformation from one psychological or physical state to another is made. When visual information is hindered we are forced to fill in the gaps of what is unseen with our own psychological projections. By creating my own iconography, by mixing the familiar with the uncertain, I attempt to address this psychological dusk of the uncanny. It is the temporality of those seconds, the splitting of absolutes that excites me.

For the past decade Monica Hoover has been working as a freelance fashion / lifestyle photographer. Currently residing in San Diego, Monica founded VOICE 1156 that co-exists as an art gallery and photography / design studio. Animal Rights enthusiast, and feminist at heart, she exercises and encourages the mantra, practice creative activism.

Monicas artwork is a reflection of her concern for current social condition as well as an expression of her photographic ethical values . Her former art training comes from her attendance at a fine-art based high school (Erie, PA) and then to Drexel University, (Phila, PA.), where she chose to pursue architecture and photography. Her fine art work is a study in portraiture aiming to capture one's essence of being. Monica feels that her artwork has an intimate twist that questions mortality and is reflection of her sensibilities.

Artist Statement: It is my intention and vision to educate through my artwork. I create to raise consciousness.

Caps and Straps is made possible through the patronage of the following sponsors: