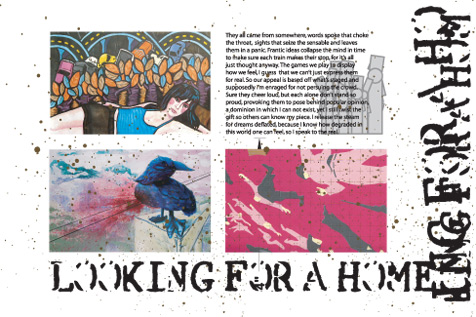 Looking for a Home

A show of emotions through actions, through words. I've traced life's structure with thought, which has allowed me to see the world with my own eyes. From Compton Ca. to continents abroad, I've displayed my art on the concrete canvas, but this expression of myself could not fully tell the story. So the words manifested themselves to script my roll. Creation brings forth life and in the light the painting shows my soul. I believe that I've found my trinity and I explain this intimately when someone's addressing me. Destiny is an unpainted canvas, I know the score, and so I use many mediums to up my stats and I swing with concentrated impulse when I'm up at bat. To those that don't know me, my name is Gershon Mosley and to the future I tip my hat. As you can tell, society fills my well. Heaven or hell, reality influences his tale. Those that grow are the ones that help my flow, these are my heroes.
P.S. I like artists that show their heart, Andy Howell, Twist, My friends


Structure plus eloquent values, Toned traits that never dissipate.
Vague to the add on accent, knowing showing acid leaves rancid tastes, placed to the curb.
The faith reinstilled by slow stimulants comprised shiny, though dull to the extent of what the star meant, yet overpowering & showering it with fits of personalities personalized that arrive at an intersection, dissecting projected promises and getting to the bottom, then working my way up.

Adrien grew up in the Bay Area and became involved in the skate culture. Through that culture he was able to express himself and considers it his launching pad towards his artistic career. He began shooting photos, and creating board graphics for Gershon Mosley, and the A-Team. Seeking a change in scenery, he went to Los Angeles on a whim and only planed on staying a week then found it would be a permanent fix filled with opportunity. In L.A., Adrien was able to expand outside of skateboarding, with apparel design working with labels such as: Black label, Stereo, Pop war, Unified, NC Collective, Levi's, and Reebok; just to name a few. Traveling has become a catalyst for new ideas and is a huge influence on his current work in which includes photography and large format painting as his main mediums along with collage and other mixed media works. Recently he started Prix Des Nations clothing, a men's knit line, which has been picked up by Barnes of New York and various boutiques. In his spare time he likes kicking it with his wife, dogs, and horse.

I reside heavenly in the suburban hell of OC and slave at the Art Institute of California.

I was just feeling into a fucking painting. But still I don't feel its' explicit enough. Like, if I'm 17, and I don't even know when I'm hungry, am I tired, have I had any sleep - if you don't even know that, then how can you talk about art that comes from such an unconscious place? I always said "I don't know," and "I still don't." What I'm trying to do is be honest, like Cockney rhyming slang or something. Like a transcendent sound that doesn't mean anything. A real fucking mess. What I do, is notice vibes, tempos of how life goes. The pace, I work with it. I source different things, books, magazines, and the generals of everything, whatever. I'm a pack rat, and I take and use whatever is around me. No preconceived idea, just a continuous out-pouring. Personally, I consider my paintings to only be a particular moment in time. I don't decipher some mythical meaning from it before. I work with it. I grow from it. From each single stroke, I want to express the moment right there and then. Then, the meaning surfaces after.

Rob Whyt has somehow found himself working deep in the OC as a freelance graphic designer/artist. A majority of his time is spent working on projects for the music/art group Patchworks. When not working on art he spends his time comparing/contrasting between his life and the lives of the characters on The OC - Things are very different.

Looking for a Home is made possible through the patronage of the following sponsors: