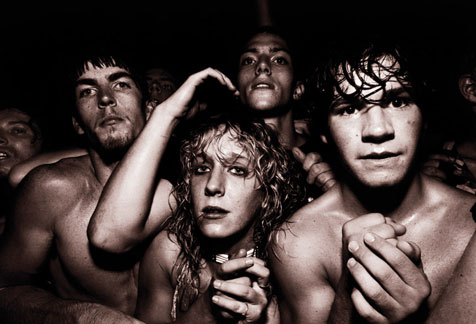 In his coming exhibition Isolated Gesture at Voice Gallery, Bil Zelman captures the subtleties of the human experience. A selection of rich black and white photographs made mostly in New York, Zelman's work is dense and intelligent, reminiscent of masters Garry Winogrand and Larry Fink.

Zelman makes his photographs anonymously; his subjects unaware or disinterested in his presence. Their actions are familiar and unguarded, honest, private and completely human. The approach is hostile; a camera thrust in their faces, an explosion of flash. They don't get even a second to compose themselves- to prepare.

The result, according to Zelman- The camera's sharp as a scalpel  cleaving out story lines clear as short films, fully narrated by the viewer. Stereotyping scenarios  Making epic out of the ordinary. The work is sympathetic to these isolated gestures, which pass unnoticed. Isolation in public places.

Zelman's images are impeccably printed, burned and dodged, the most important of details etched out. His meticulous approach to the gelatin silver photographic prints results in an incredibly beautiful and inspiring body of work.

Born in 1972 and raised in New York, Bil received his Bachelor Degree in Fine Arts from State University of New York at Buffalo in 1995. Zelman presently lives in San Diego, California, works in commercial photography and has been widely published worldwide in numerous print forms including every magazine from GQ to Rolling Stone. His fine art photography has been shown or collected by The Museum of Photographic Arts, The Center for Photographic Arts-Carmel, CA, the University of California San Diego, The Center for Exploratory and Perceptual Arts, Hallwalls, the Nicole Dintamin Gallery and others.

His book, Isolated Gesture, is currently being published by Push-Press and is due out late 2006

Isolated Gesture is made possible through the patronage of the following sponsors: